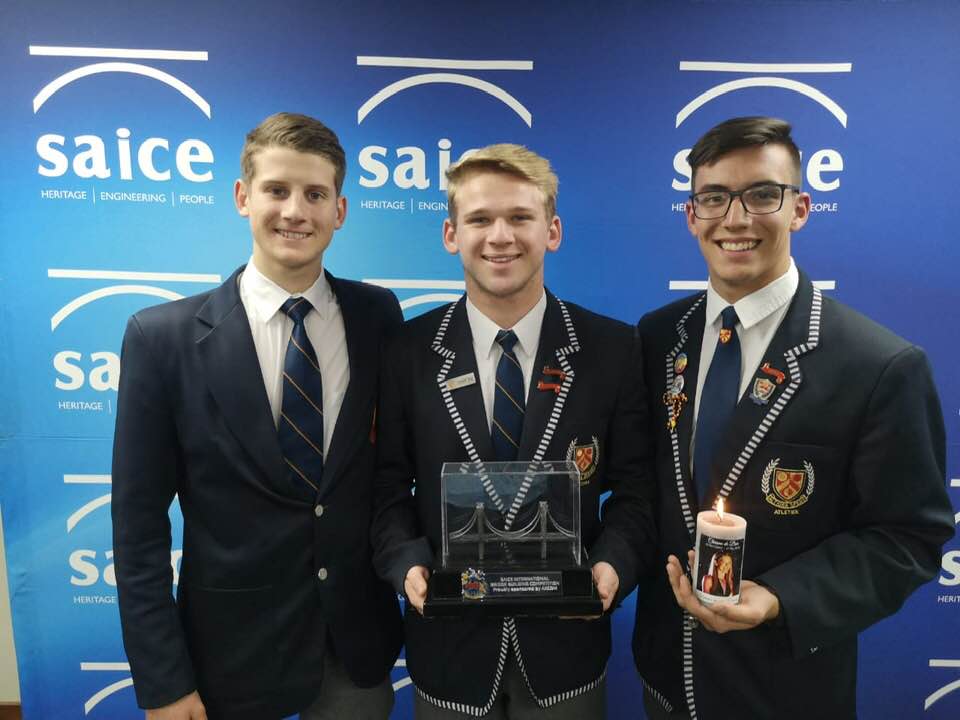 From: THE SOUTH AFRICAN INSTITUTION OF CIVIL ENGINEERING (SAICE)

In this year’s thrilling instalment of the International Bridge Building Competition, Brackenfell High School carried the first place trophy proudly back to the Mother City. This event, organised by the South African Institution of Civil Engineering, was held at Southdowns College in Centurion on 30 August 2019.

There are numerous factors which determine the score such as aesthetics, the mass of the bridge and the weight-bearing capacity. Contestants from the winning team; Marx Meyer, Rohan Smith and Branden Warwick constructed a bridge using dowel sticks and glue, weighing in at 120g, which had a remarkable weight-bearing capacity of 244kg, their total score was 846.

Sarel Cilliers High School from KwaZulu-Natal came in second place with team members Janz Potgieter, Dihan Kruger and Thubelihle Luthuli whose bridge weighed 123g which withstood a weight of 201.1Kg before breaking. Their total score was 691.5.

Finally securing their position in third place, Daniel Pienaar Technical High School consisting of Janu Ferreira, Dylan Willett and Veandré A Frazenburg constructed a bridge weighing in at 124g that succumbed to the weight of 92.8kg.

Very few interventions or career days have the advantage of practically illustrating what a career is all about. The finals of the very successful annual SAICE International Bridge Building Competition, provided learners with this opportunity.

Approximately 600 schools from across South Africa, Eswatini and Zimbabwe are reached to determine who the finalists would be in this exciting competition, now in its 28th year. The finalists from all the regions, organised by the SAICE Branches countrywide, compete for the much sought-after trophy and the substantial cash prizes for team members and their educators.

An informative presentation was done by a civil (bridge) engineer on the stresses and strains to be taken into account when designing a bridge. This year, there was a fictional phone call from the mayor of a small town who requested the participants to design a bridge across the Vaal River to replace their existing aging bridge. He gave them the measurements in meters instead of the usual millimetres, which posed as an additional challenge to the participants having to convert the measurements to the scale workable with what they were given for their construction. Each team consisted of three learners from Grades 9 to 12. The bridge building kits contained 25 dowel sticks of 4mm nominal thickness, glue and a piece of string. Construction of the bridges was done according to a technical briefing given on the day. The teams then got down to the gruelling business of planning, designing, measuring, cutting dowel sticks and constructing the bridge by gluing everything together to form sturdy bridge structures, while racing against the clock towards tools-down time! The contributions of RiChem, the glue sponsor, Penetron, BVi Consulting Engineers and SAASTA ensured the smooth and successful running of the competition.

The adjudicators completed their task regarding bridge aesthetics and mass. The teams, after having exchanged daytime T-shirts and tracksuits for school uniforms, gathered in the staff room for an evening of nerve-racking testing of their bridges. Excitement mounted, hopes soared and some dreams were shattered as one team after the other bring their bridges forward for testing on the rigg. Each and every bridge was tested to destruction to ascertain its weight-bearing capability.

SAICE was very privileged to have had a team from the Teenagers on a Mission TV programme, recording the event and interviewing some of the participants as part of focusing on careers within the STEM sphere.

The South African Institution of Civil Engineering (SAICE) initiated the bridge building competition in 1991 to further high school learners’ use of Mathematics and Physical Science to grow the profession. It has since become an enormous success. The bridge building competition forms an integral part of some schools’ activities and is recognised on the same level as academic or sports achievements.

Because of its practical and hands-on nature, this event is SAICE’s most successful initiative in attracting learners to civil engineering, as well as promoting a general awareness of the profession. The competition provides an ideal career guidance opportunity. Although there can only be one winner, all these learners benefit by participating and being in a big city. Some learners even experienced flying in an aeroplane for the first time.