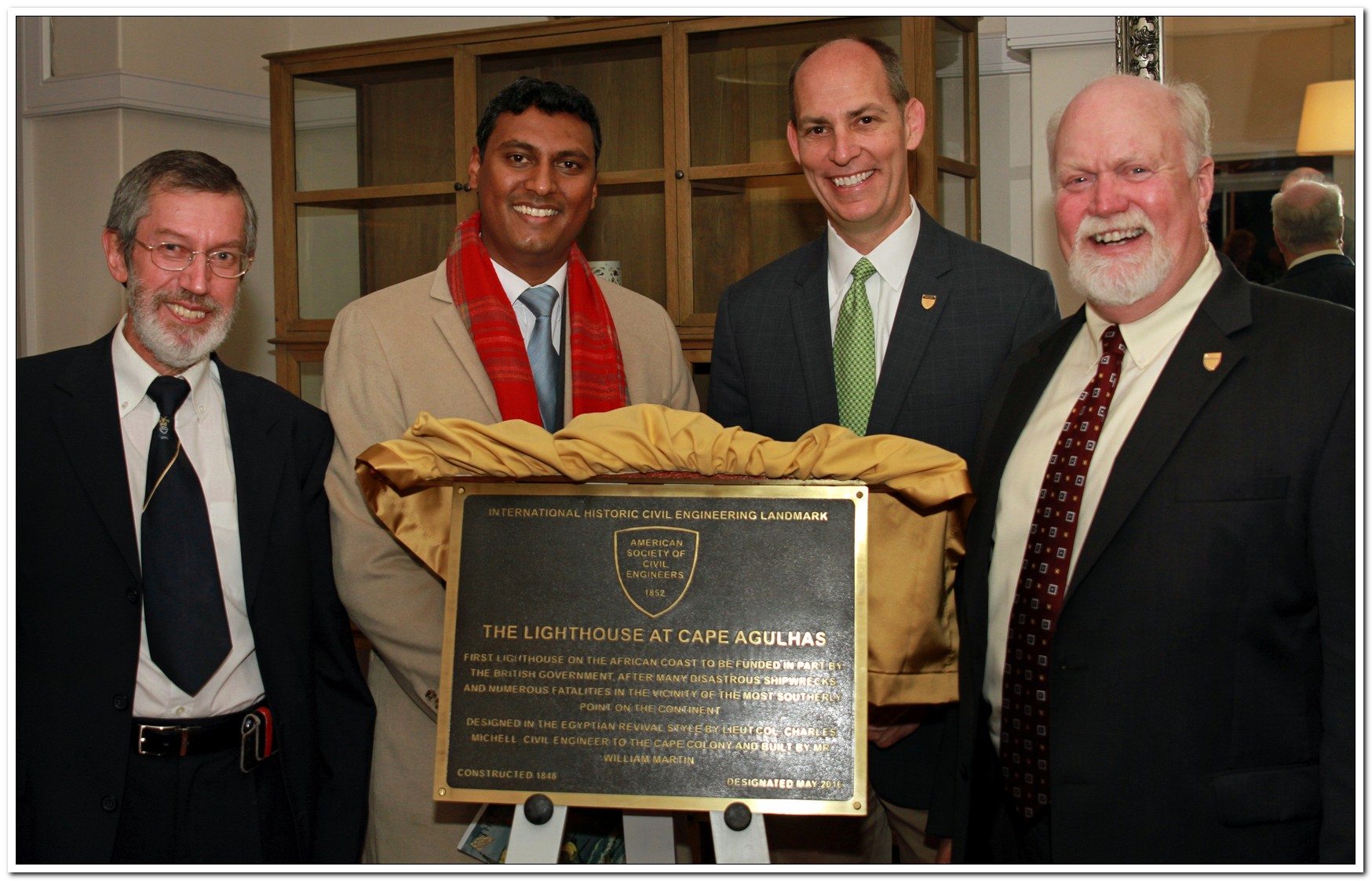 In a private and prestigious event held at the Cape Peninsula Hotel School on Granger Bay, in Cape Town on 12 May 2016, the Cape Agulhas Lighthouse was declared a Historical Landmark by the President of the American Society of Engineers (ASCE), Mark Woodson P.E.

ASCE awards its International Historic Civil Engineering Landmark status to selected works which comply with very strict criteria.  At present the only landmarks in Southern Africa are the Victoria Falls Bridge over the Zambezi River and the Woodhead Dam on Table Mountain.

The local counterpart of ASCE, the South African Institution of Civil Engineering (SAICE) was invited to nominate another work for consideration by the ASCE Heritage Committee.  The SAICE History and Heritage Panel considered several projects and it was felt that the Lighthouse at Cape Agulhas was the most deserving of the accolade in accordance with the ASCE criteria.  After a comprehensive investigation, ASCE decided to accept the proposal.

The Cape Agulhas Lighthouse is situated at Cape Agulhas, the southernmost tip of Africa. It was the third lighthouse to be built in South Africa, and the second-oldest still operating, after Green Point. The lighthouse at Cape Agulhas was the first to be built after a long and arduous campaign by the citizens of the Cape Colony to convince the British Government to finance the construction of lighthouses in its territories around the world.

The structure was designed by the Civil Engineer to the Colony, Lt. Col. Charles Michell and built by Mr William Martin.  The design in the Egyptian Renaissance style is thought to be unique amongst world lighthouses. It first displayed its light on 1st March 1849 and is still in service today.  The benefit to shipping has been enormous. Today the lighthouse serves more than just being brick and mortar – but as a tourist attraction stimulating the quaint village of L’Agulhas and stands tall as an edifice bearing testimony of the social and economic contributions of civil engineering.

The event itself, was attended by a host of special guests, including the 2016 President of SAICE Dr Chris Herold, SAICE CEO Manglin Pillay PrEng, and Executive Director of ASCE, Thomas Smith and Director of Global Programs Meggan Maughan – Brown. Also in attendance where Chris Roth PrEng, Chair of the SAICE History and Heritage Panel, representatives and management of the Lighthouse and SANPARKS as well as various guests representing academia, historians and members of the media. The plaque which commemorated the award was officially unveiled at the Lighthouse on 14 May 2016, by ASCE President Mark Woodson P.E in Cape Agulhas.