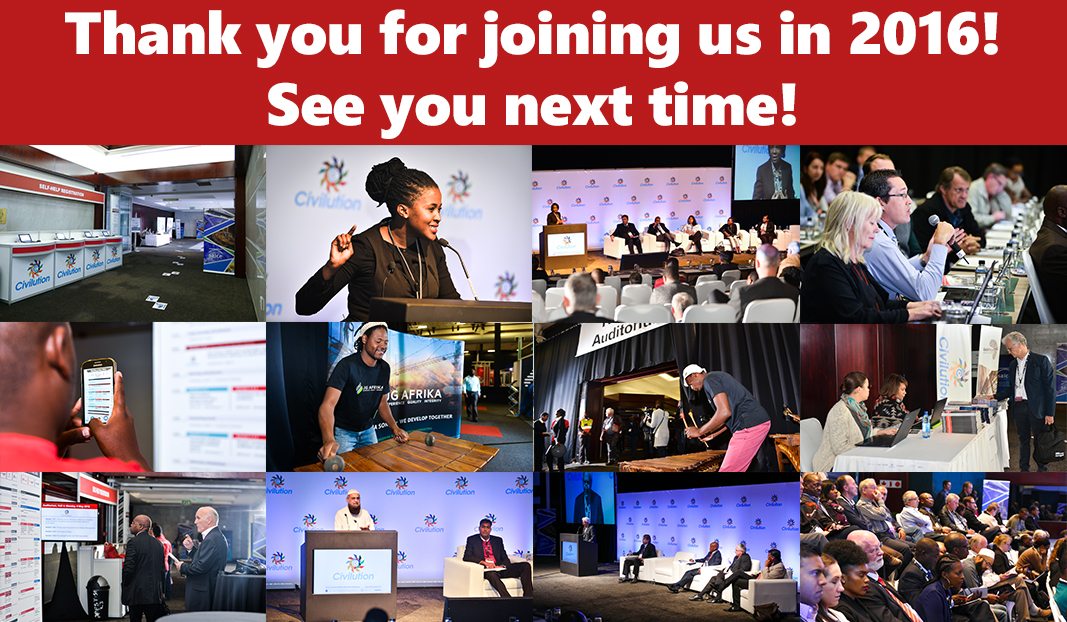 The Civilution movement, powered by the engineering industry, works toward removing hindrances that preclude engineering practitioners from doing what they should be doing. The engineering community gathered at Gallagher Estate for the much anticipated second instalment of the Civilution Congress held on 9 – 10 May. Forty expert speakers and panellists gathered for the movement to address over 250 high-level conference delegates. The event showcased ideas, innovations, products, technologies, services as well as solutions that are driving the continent’s industry forward.

As delegates expectantly filled the auditorium for the opening keynote session SAICE CEO Manglin Pillay officially declared the congress open with a welcoming address thanking partners and sponsors as well emphasising the importance of having industry collaborating to produce workable solutions pertaining key issues facing the industry. SANRAL CEO Nazir Alli CEng, kicked off the proceedings with an opening plenary titled Attracting viable and sustainable implementation of engineering and infrastructure delivery in South Africa. Mr Alli discussed the need for all to leave a lasting legacy, one that future engineering generations can be proud of. Expert panellist Malcolm Pautz PrEng, immediate past president of SAICE shared ideas on alternative financing for the implementation of engineering and infrastructure delivery in South Africa.  Abram Masango, Executive at Eskom, who also sat on the panel, highlighted the importance of competent skilled engineers. The audience joined the conversation raising the issue of training of graduate engineers.

The Gauteng MEC of Roads and Transport Ismail Vadi delivered a powerful address titled: Going back to basics. The address delved into what should be done to ensure that the vision and plans for Gauteng’s transportation systems continue to be on the top of the agenda for engineers.

Aside from the main plenaries, the Congress also hosted breakaway sessions. With the ongoing drought which South Africa is currently experiencing, Professional and Chartered Engineer, Mike Muller presented a workshop on Water Security in southern Africa. “We need to be concerned about the water resources that underpin water supply. Gauteng’s strategic reserve is held in the Sterkfontein dam, the third largest dam in South Africa and it holds more water than the Vaal dam”, said Muller.

Muller continued, “It is not filled by a river, but pumped in by Eskom from the Thukela river in KwaZulu Natal. For some reason, in December Minister Mokonyane – Minister of Water Affairs and Sanitation of South Africa – decided to release 10% of the water in Sterkfontein. That is enough to keep Rand Water working for two months. The Department promised to replace it rapidly. However, six months later the dam is still 10% lower than it should be.”Concluding Muller said, “We need the Minister to explain why her Department is reducing Gauteng’s water security and what she is going to do about it. If this year’s drought continues into the next season, we will be at risk of severe restrictions.”

Day 2 commenced with a joint opening plenary session with African Construction and Totally Concrete in which Senior Economist of Nedbank South Africa Nicky Weimar facilitated a discussion titled: Real-world infrastructure delivery in Africa. In addition to the breakaway sessions delegates also got the opportunity to experience the Civilution and ACE/TCE exhibition floors which jointly featured over 180 exhibitors.

The congress ended with a plenary address delivered by Religious Leader, Pastor Ray MacCauley. In his address Pastor MacCauley spoke of the critical role engineers have to play in society as custodians of infrastructure and drivers of the economy. In relation to this he emphasised the importance of upholding the standards and ethics within the industry to ensure that engineering remained a profession invested in its founding values which are centred on ethical conduct and wellbeing of civil society. Calling upon on all engineering practitioners to rise to the challenge of re-committing and reviving ethical practice and conduct within the profession he said, “It’s easy to complain but sometimes we permit what we complain about…it is said breakfast is the meal of champions – ladies and gentlemen breakfast is served, come to the table.”

Other highlights of the Congress included the Women in Construction Awards and Cocktail Function as well as the Young Members Ethicana Play which was attended by the visiting American Society of Civil Engineers President Mark Woodson, Executive Director Thomas Smith and Director of Global Programs Meggan Maughan-Brown. Both events where hosted at the end of day 1 and 2 of the Congress respectively.

Find out what the key participants and speakers who attended the Congress had to say.