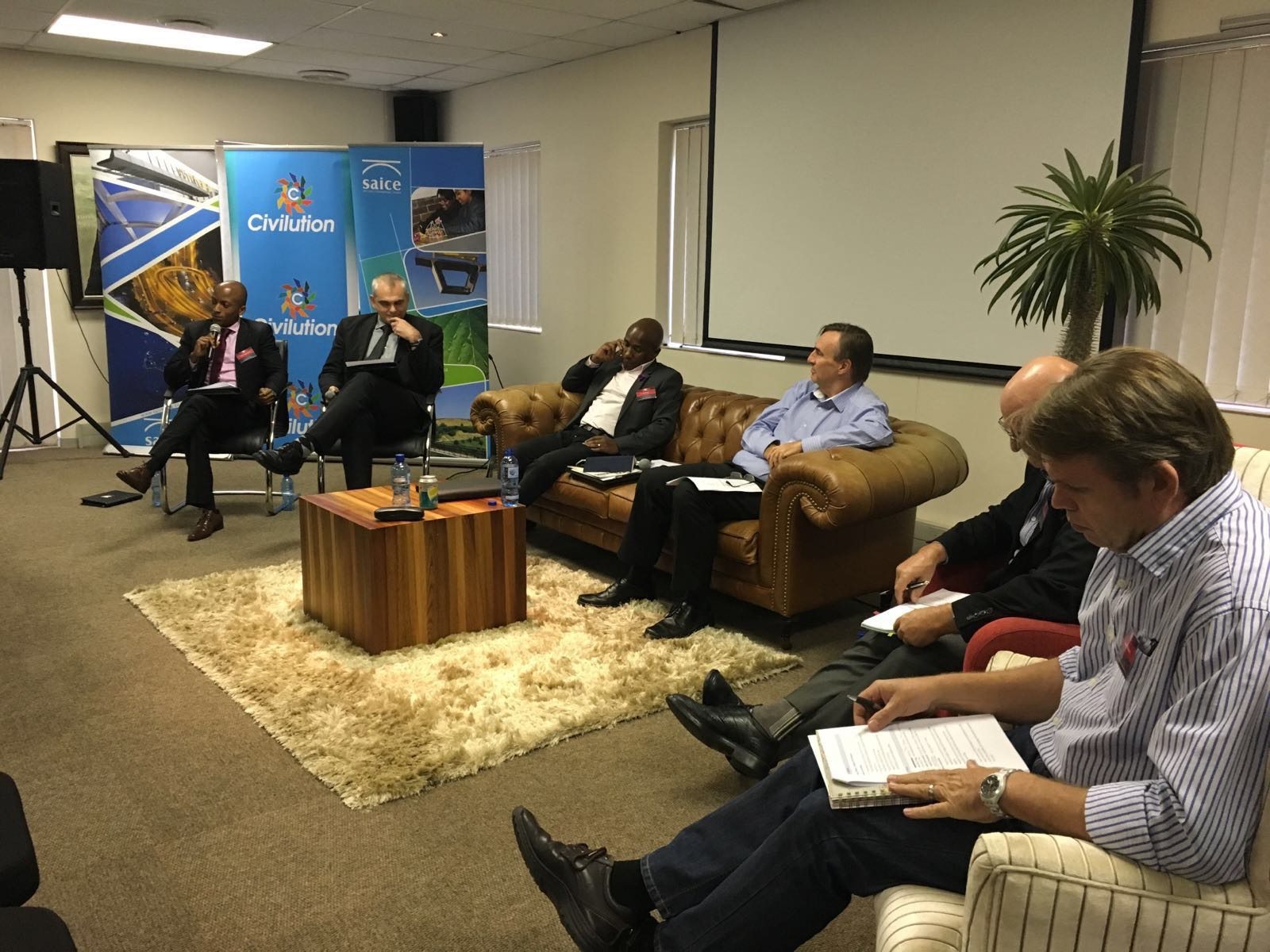 SAICE hosted the first of its quarterly Civil Talks earlier this month at their offices in Midrand.

Civil Talks are a platform in which professional talks are held on controversial topics which influence our country and industry. All SAICE members are invited to join the talk, which is run by a panel of engineering professionals and government individuals who provide insight and in-depth knowledge on the relevant topics.

The Civil Talk titled: “The role and collaboration of ECSA and Voluntary Associations in professional registration” was facilitated by Sean O’ Beirne Director of SE Solutions. Sitting on the panel to provide expert commentary and insight into the topic were:  Thabo Senooane and John Cato representing ECSA. Also on the panel were, T.C Madikane Vice President of the South African Institution of Electrical Engineers (SAIEE), Frederick Oosthuizen of SAFCEC as well as Hilton MacDonald of SAICE.

The talk instantly addressed the elephant in the room with O’Beirne posing the question to the ECSA representatives on whether Voluntary Associations (VA’s) had any role to play in the professional registration process – to which Senooane readily admitted that while ECSA had an existing collaboration with VA’s, the relationship was not nearly as functional and effective as it should be. This quickly opened up a heated discussion about the “blurred lines” that existed in the roles of ECSA and the VA’s which prevented the set-up of a functional relationship.

While the challenge of maintaining professionals and keeping incompetent persons out of the industry was one that all parties present seemed to agree on as an overarching goal – the facilitation process in which professionals are produced, seemed to be heavily contested.

Oosthuizen, maintained that despite the aspirations of collaboration, the founding roles of ESCA and the VA’s should not be compromised – “VA’s must be careful not to fall into the trap of taking on ECSA’s regulatory role. The function of the VA is to represent and protect the interests of its individual members”, said Oosthuizen.

Senooane pointed out that ECSA was working on finalising a framework that clearly defined various roles that would be taken by ECSA and VA’s in the registration process – and that ECSA was committed to making the process of fostering closer relations between itself and the VA’s a consultative one. He further confirmed that the consultative process would be completed within the next two months.

Madikane, while expressing his unacquainted knowledge of any consultative process taking place between the statutory body and the VA’s – commended ECSA for committing to a clear time frame within which to achieve this goal. “ECSA is known to work on issues endlessly, I’m pleased that today they are talking about clear time frames”, said Madikane.

The framework is one that would see ECSA laying down a foundation for collaboration by formalising the roles of both parties within professional registration. The consultative process prior to releasing the framework will allow ECSA and the VA’s to discuss the jurisdictions of their key roles with the view of eliminating overlaps and grey areas.