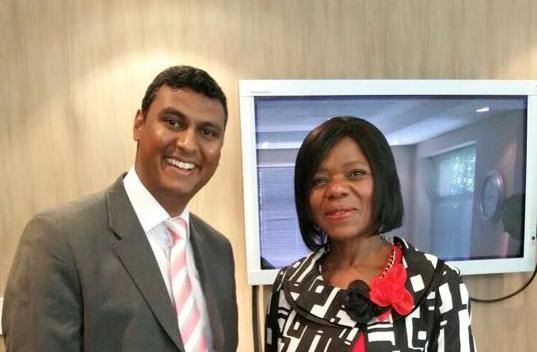 Everything will be all right in the end. If it’s not all right then it’s not yet the end.

Mary Molefe and Sakina Mukandawire work at SAICE National Office. They are charming and friendly, and reliable like clockwork. It is their pride to keep our offices clean and impressive. I have had the privilege of Mary and Sakina joining me for an exclusive meeting with the Public Protector recently. It made my heart dance to see how well they represented SAICE when they addressed Advocate Thuli Madonsela. Mary, in a moment of inspiration, thanked this TIME magazine world leader for being a role model and the moral conscience of the country (Adv Madonsela was included in TIME magazine’s 2014 list of “The 100 Most Influential People”). The ladies celebrated with the exchange of gifts and photographs. Both Mary and Sakina have subsequently expressed interest in pursuing studies in law.

Fridah Mahlangu is another role model and champion. She has progressed from being an obscure office administration officer into a leader in SAICE’s Career Guidance Department. Last year Fridah did some business for SAICE in Durban – it was the first time that Fridah travelled by aeroplane and it was the first time she felt the cool touch of the ocean surf on her feet. In 2015, she received her driver’s licence, bought her first car, and also enrolled her beautiful daughter at Stellenbosch University to study for a degree in food technology.

Is South Africa a better place than it was in the past? It’s a complex and integrated question loaded with perception and emotion. Well, it depends who’s answering the question. For Mary, Sakina and Fridah, and millions of low- or no-income people who are being buoyed into a distinct middle class, the sensation of freedom and equality has never been more tangible. For those whose privileges and positions of power have been reconstructed, bitter waters flow where once sweet waters poured out.

In my opinion, this is the same for engineering businesses. Is civil engineering business currently profitable, and what about the future for consulting and contracting? For multinational consulting and contracting companies it’s tough, and the future is bleak in South Africa. The mega companies’ business models, and their magnitude, are simply incongruent with local policy and the national development needs of the country. But our international seducers knew very well the projected state of the civil engineering and construction environment when they set up shop in South Africa. I am not convinced the bosses in the UK, USA and Australia are in panic mode yet.

The new entrants and small- and medium-sized companies are thriving in the current South African climate. In my engagements with the small- and medium-sized companies, they are extremely busy. While the mega companies are closing offices nationwide, and retrenching staff, these companies are opening offices and employing staff. How the tables have turned, and are turning. I commend our government for progressively achieving this outcome. Individuals, who in our recent history could only dream of qualifications and entrepreneurship, are now owning and managing successful engineering businesses. I recently attended a ten-year celebration of such a company. The New South Africa felt palpable there.

The Civilution Congress 2016 is upon us – we are in interesting times. I have now officially been at SAICE for five years (since October 2010). After five years of purposeful discovery, I have embarked again on a personal mission to rediscover my own purpose, while I am assessing potential enhancements for the direction of SAICE. Civilution, if you recall, is “the engineers’ revolution which is firstly an introspective conversion, where we abandon pessimism and distrust, and then regenerate ourselves to becoming a creative and intelligent part of the solution.”

In keeping with this rhythm an expected outcome is that everyone is required to reinvent themselves, to be creative and come up with bright, unusual ideas. The large multinationals are predestined to aggressively and competitively launch into Africa, while the new entrants and small- and medium-sized companies are required to professionalise, become reliable, offer top-quality service, and align themselves to the developmental needs of the local and SADC markets.

As an aside, in my glass ball I see tremendous opportunity for graduate engineers to dominate the space.

So, is there commercial benefit and merit in the future of the civil engineering and construction business in South Africa? It depends who’s answering the question.