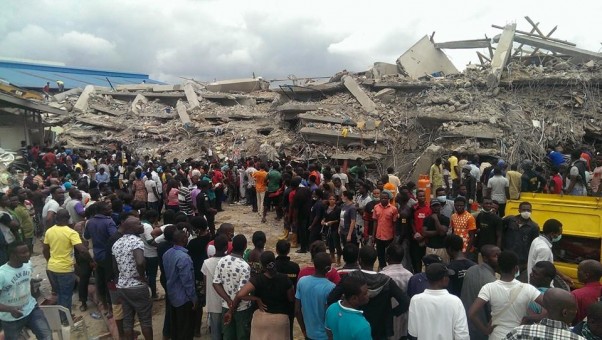 The death of more than eighty South Africans and the many injured during the collapse of the guesthouse of the Synagogue Church of All Nations (SCOAN) in the Ikotun District of Lagos in Nigeria, has shocked fellow South Africans. The South African Institution of Civil Engineering (SAICE) expresses its sincere sympathy with the families of the deceased and with the survivors in these trying times.

As a civil engineering institution, questions need to be asked concerning construction standards, and health and safety issues. It is of great concern that, at a facility which hosts thousands of foreigners, including vast numbers of South Africans, annually, the local National Emergency Management Agency (NEMA) could only start rescue work on the Sunday, while the collapse already occurred on the Friday. It is a well-known fact that the first hours/days after such an incident are crucial for saving lives. How many lives could have been saved had rescue teams been able to start the search on Friday? In a tragic incident of this nature, who has precedence in providing the necessary rescue support – the local ‘owner’ or the official rescuers?

Had the building been well constructed, would this have happened and would so many have been in peril of injury or lost their lives? To avoid similar incidents happening again, SAICE implores the Nigerian government and the President of the Nigerian Society of Engineers, Engineer Ademola Olorunfemi, to ensure that an exhaustive and transparent investigation be done as soon as possible. This is not only because South Africa has been terribly affected but because the entire continent is in mourning and looking for answers.

Fidelis Emuze, the Head of the Department of the Built Environment at the Central University of Technology in the Free State, and construction expert, according to The Star of 19 September 2014, explained that he had built his family home approximately 10 km from the site of the collapse in Lagos, and that the soil was solid for low-rise buildings. Emuze said this led to questions: Who sanctioned such an endeavour (to have four additional floors added to the two-storey guest house) without considering the “carrying capacity” of the soil strata? What are the strengths of the materials used for the renovations?

Emuze further said that the “Nigerian authorities should also investigate what the original design and functionality of the building was and what was done to support the structure as more floors were built on top”.

Professor Mitch Gohnert, Head of Civil and Environmental Engineering/Head of Structural Engineering at the University of the Witwatersrand said on Saturday that had the necessary structural strength been provided for the additions to the building, the collapse would not have occurred.

A further concern is that diplomatic tensions between South Africa and Nigeria seem to have escalated/increased in the SA government’s efforts to find answers regarding the collapse. Nigeria declined international assistance in the search for the girls abducted by Boko Haram and they are now reluctant to send a message that there is not adequate capacity in Nigeria to deal with the current situation. This, and the fact that South Africa was not formally informed of the tragedy and had to seek information through its own sources in Lagos, could have led to the large number of people  not rescued in time.

On learning of the tragedy, the Department of International Relations requested Search and Rescue South Africa’s team with sniffer dogs, to be on standby. This team, regarded as among the best in the world, were on standby. And, that is where they remained – on standby, as Nigeria refused their assistance! Had they been allowed entry into Nigeria in the crucial first 24 hours after the incident, both the death toll and extent of injuries could have been reduced by getting people out of the rubble in this short window period after serious trauma.

General Manager, Lagos State Building Control Agency, (LASBCA), Dr Abimbola Animashaun, concerned about the numerous building collapses has declared that in future, violation of building codes would not be tolerated. She emphasised that government would shut down construction sites and seal dangerous structures being built. It is shocking though that Dr Animashaun revealed the situation in which enforcement officers find themselves – being denied access to barracks and religious institutions to ensure adherence to building codes and even being brutalised trying to gain access to partially collapsed buildings!

If not at such a late stage, and with a history of collapses, one could almost applaud the Lagos state government for ordering urgent structural integrity tests on all buildings in the sprawling SCOAN compound. However, how many more buildings will collapse and how many lives will be lost before they get their house in order?

The South African government has to be applauded for trying to get information under the initial circumstances, providing a facility at OR Tambo Airport to assist survivors and the families of missing and dead ‘pilgrims’, as well as airlifting seriously and critically injured South Africans from Lagos to South Africa, accompanied by specialised doctors, nurses and military paramedics.