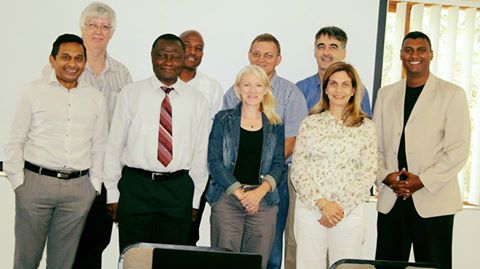 Author : Lorraine Mpofana
SAICE convened with university civil Engineering Heads of Department (HOD) on 23 January 2017 at SAICE national office, Midrand. At the annual meeting, SAICE hosted six HOD’s from leading universities around the country.  In attendance at the meeting were:

Some issues that were tabled for discussion included plans to incorporate civil engineering student textbooks within the SAICE bookshop – as a student member benefit. Further discussions centred on meeting graduate output targets in relation to the challenges of being short- staffed and lacking critical resources such as laboratories. The #FeesMustFall movement was also discussed as one of the issues needing serious attention and resolve.

The ailing job market and lack of roll-out of infrastructure work as per the aspirations of government in the National Development Plan (NDP) was also noted as one of the challenges that affect the cycle of producing a high quality and competitive graduate output to meet the scarce skills deficit in the country.  Raising this issue Kobus du Plessis of University of Stellenbosch said, “We have a responsibility to not only increase the number of quality graduates but to ensure that they will be absorbed into the job market and not leave the country”.

SAICE will meet with the HOD’s of the Universities of Technology on 16 February 2017.