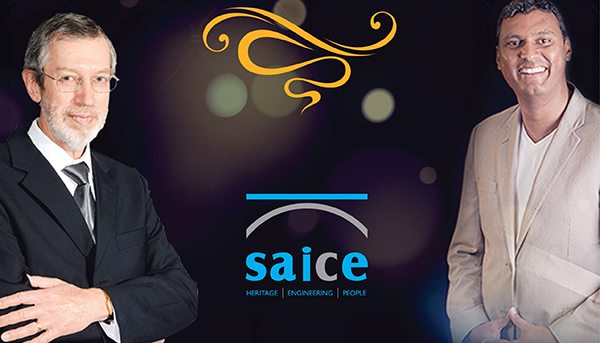 It is that time of the year again! The SAICE presidential visit is on hand taking place on 21 – 22 April 2016. Dr Chris Herold, 2016 SAICE president, will be accompanied by Manglin Pillay, CEO of SAICE.

Feedback on a questionnaire from SAICE members in North West, indicated a number of issues that they would like to be addressed locally and nationally. It ranged from requests for decentralising seminars, CPD courses, Civil Talks, etc. to benefit members in the regions to the quality of professionals in government departments, to uncertainty in the workplace, and more.

In his presidential address titled “A long haul, but we can do it together” Dr Herold looked at reasons why the Department of Water and Sanitation (DWS) could not retain the services of young professional engineers who were expected to move onto the lower managerial ranks in the civil service. Some of his findings were:

Is it any wonder then that young graduates didn’t feel welcome in what had become an engineer-unfriendly environment? Dr Herold continued, “Fortunately the uphill battle of overcoming the former (DWS) spirit of denial is dissipating, and there is a growing awareness and ownership of these problems amongst decision-makers. Now we have to provide the solutions. The task ahead of us is steep, but not insurmountable – solving difficult problems is what engineers are good at.” He provided short-, medium- and long-term actions, which he will highlight when addressing members.

The quality of professionals in the three tiers of government is two-pronged: Some of the few qualified engineers, technologists and technicians currently in government employ, are yet to be professionally registered with ECSA; and secondly, many posts have been filled with inadequately qualified or non-technical candidates. It is for this reason that SAICE has been engaging government and other structures regarding the re-professionalising of all three tiers of government, i.e. local, provincial and national as a matter of urgency.

In a survey conducted among more than 1 300 members, 68% of the civil engineering practitioners indicated their willingness to work in the public sector, provided certain conditions are met. This provides valuable insight when it comes to engaging with relevant Ministers regarding the contentious and persistent issue of ailing technical capacity in the public sector.

In a PPS survey in November 2015, Manglin quoted Dr Martin van Veelen, past president of SAICE, by saying, “South Africa is fortunate to have a competent and experienced corps of engineering practitioners and it is one of the few African countries that does not need consultants from overseas to solve the challenges that we face as a developing country. However, the centre of this accumulated wisdom lies in an ageing group of professionals and it is vital that this knowledge is passed down to our younger and inexperienced engineers.”

As far as the challenges faced by the industry are concerned, Pillay says that government is not rolling out the necessary infrastructure projects which in turn could contribute toward job creation and economic stability. “Key to address this concern is to employ the services of highly experienced engineers at all tiers of government to ensure the necessary roll out of infrastructure spend and that the infrastructure budget is allocated accordingly.” Once this happens, the issue of job security and retrenchments which have affected a disturbing number of highly qualified and experienced engineers, could hopefully be reversed.

The survey has indicated that civil engineers are willing and able to work for government. All tiers of government should now engage with these engineers through SAICE to alleviate the dire shortage in these structures. This will result in fewer protests in local government as services will be delivered with civil engineering practitioners assuming their rightful role, i.e. delivering services!

The presidential delegation looks forward to meeting with you all to discuss these and other relevant issues. Please join us for a day/evening of engagement and enlightenment.