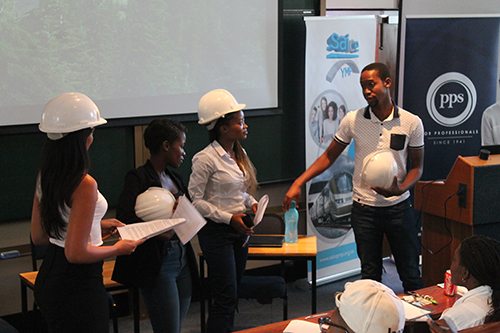 SAICE’s Young Members Panel (YMP) has taken on the task of empowering South Africa’s future civil engineers by conducting a series of road-shows across the country. This initiative has been established with the aim of reaching young minds whilst preparing them for the workforce. In addition, students in their third and final years are given the necessary tools, skills and mind-set to embark on the journey of being active, efficient engineering professionals.

The first road-show of the year was held in collaboration with PPS at the University of the Witwatersrand at the End of March 2016. SAICE’s YMP facilitated a full day of exciting presentations for the young civils. YMP representatives included Zukiswa Mvoko, Dlozi Mnisi and Shilpi Jain. Oliver Rouw, ex YMP member and current Pietermaritzburg Chair facilitated the event with a flare of humour and wittiness that had students captivated.

First to the podium was Shilpi Jain, who welcomed the students and highlighted the role of SAICE in the industry. Macy Seperepere from PPS gave students an overview of the benefits provided by PPS to professionals who register for the company’s services. Dlozi Mnisi encouraged students with his early career experiences, delving into the transition period from student to employee, the differences between consultants and contractors as well as public sector offerings.

The next PowerHouse session began when Oliver Rouw took to the podium and enlightened students on how to brand and conduct themselves professionally within the workplace – he also highlighted the value of networking. The ECSA registration process was further reiterated and Rouw motivated students about the advantages of being a PrEng. Zukiswa shared information on social awareness and the value of finding a balance between studying at university and being in the real world.

The final talk of the day centered on a massive issue in the country, that being – ethics and corruption which concluded with an exciting Ethicana Play. SAICE’s YMP opened up the floor to a live question and answer session which gave students the opportunity to gain clarity on any unsettled thoughts.