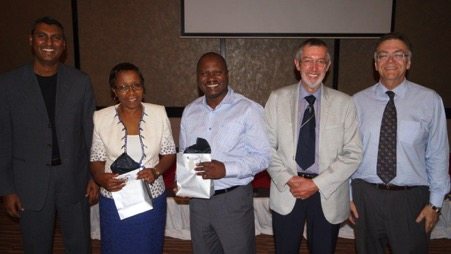 SAICE 2016 President Dr Chris Herold, CEO Manglin Pillay and COO Steven Kaplan recently met with the Lesotho Association of Engineers (LAE) as well as the Lesotho Highlands Development Authority (LHDA) to discuss how both institutions could work together to achieve common goals.

The LAE is a legally registered body in terms of the laws of Lesotho and are currently working towards legislation of the construction industry through an act of Parliament. The Association expressed a keen interest to collaborate with SAICE on issues pertaining to capacity building of the Lesotho Engineering Profession whilst awaiting the finalisation of the act.

SAICE’s delegation also met with LHDA CEO Refiloe Tlali and COO Doctor Lukhele during the trip to further discuss partnerships between organisations. Tlali noted that even though it had been 30 years since the formation of the LHDA, they still have many unregistered engineers in their employ.  The urgent need to bring Allyson Lawless’ Road to Registration courses to Lesotho was highly stressed.

The discussion revolved around:

•                The legislation of a council for the registration of engineers practicing in Lesotho.

Doctor Lukhele took the stand and presented on the newly created LHDA Internship Programme that centered on graduate internships, student internships, young professionals and bursary programmes. In addition, the presentation highlighted the LHDA’s commitment to the development of professionals in Lesotho.