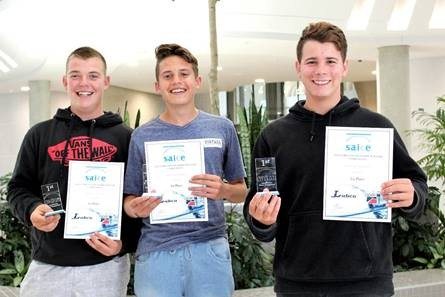 SANRAL and SAICE drives the development behind young engineering minds

“This competition demonstrates the importance of managing water distribution systems which are important to supply safe and clean drinking water to people. It also exposes the learners to the field of Civil Engineering and provides a glimpse into why Civil Engineers play a critical part in our infrastructure management,” said Pieter Joubert, SAICE Algoa branch chairman.

SANRAL Southern Region’s Marketing and Communications manager, Michelle Ah Shene said participating in SAICE events is an extension of SANRAL’S commitment to the development of the civil engineering field.

Saturday’s competing teams were tasked to design a model water distribution network to distribute three litres of water equally between three points on the grid using two different diameter pipes and various connection pieces. They were then judged on how well they executed the task – working on a penalty points system.

The teams had approximately one hour in which to plan, design, build and operate their network.

What started as a South African competition where learners had to design, build and operate a water distribution system, exactly the same way qualified Civil Engineers would do in a municipality, has over the past three years become international with Swaziland and Zimbabwe also participating in the national SAICE competition.

“This is an adventure that all learners remember once they had been there to experience the challenge first-hand,” Joubert said.

“This competition exposes learners to the processes which influence their daily lives and is often taken for granted, such as providing water supply to homes. They are made aware of the intricacies involved in the design of water distribution networks and the actual water delivery to households,” Joubert added.

Joubert explained that the grid used for the water distribution network is on a background that depicts the water cycle with all the major impacts affecting this scarce resource. This grid intrigues learners, as well as educators, who find it a very useful educational tool.

The competition creates awareness regarding the issues surrounding water in South Africa. It spreads the message that water is a precious commodity, which should be recycled, re-used and respected. Through this annual competition SAICE takes the responsibility of spreading the news that water should be used wisely, that infrastructure should be maintained and that new infrastructure should be developed to provide potable water to all in South Africa.

Juandre Gilbert of Framesby High School said he enjoyed participating in the competition. “It was extremely fun to do the experiment. When we arrived here we had no idea what to expect and what to do. We can go back to school and share what we have learned with fellow classmates.”

Steyn Williams of Brandwag High School said he was happy to have participated in the competition. “I am glad to be here. This was quite a learning experience.”

Morgan Moss of Alexander Road High School, who was the only learner representing his school won second place. “This was exciting. I was nervous because I was not sure if they would let me participate because I was alone from my school and the competition entries call for a 3-member team. Maths and science are my favourite subjects. I also enjoy doing experiments and building things.”

Brandwag High Grade 9 to Grade 12 Science teacher, Peter Baxter, said the children enjoyed participating in the competition. “This was exciting and challenging for them.  They looked forward to this experiment.”

Baxter also added that some learners from Brandwag High also participated in the SANRAL and STEM PP projects.

Loyiso Senior Secondary Tarisai Seven, a Grade 8 and Grade 9 Science and Technology teacher said the school had two teams participate during the competition.

“Competitions like this one is very important to open the minds of the learners. Today was important for the learners who gained knowledge about the working of water systems. At school there are not many experiments that take place because resources at the school are little.”