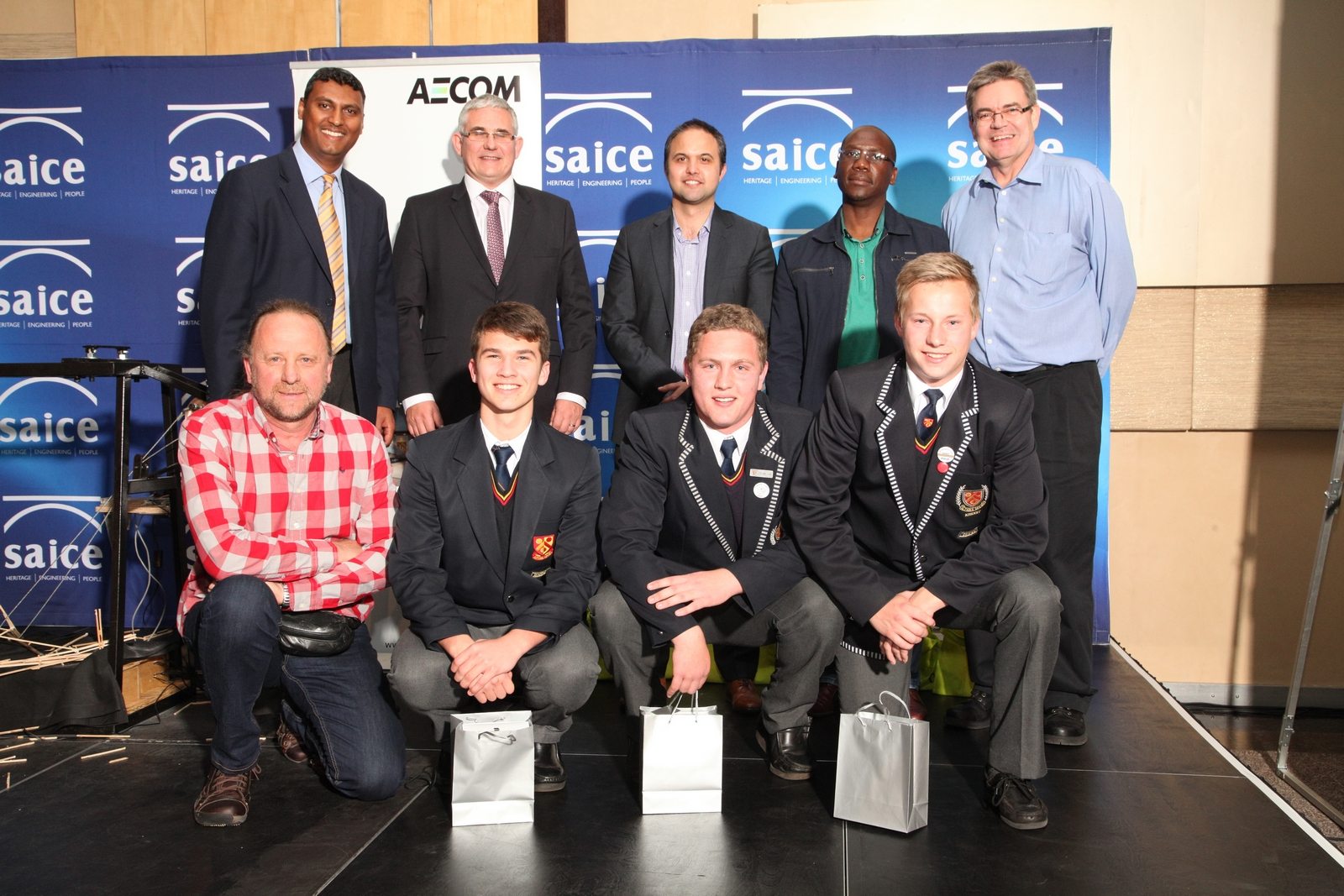 Very few interventions or career days have the advantage of practically illustrating what a career is all about. The finals of the very successful annual AECOM-SAICE International Bridge Building Competition 2015, organised by the South African Institution of Civil Engineering (SAICE), provide learners with this opportunity. It was held at the Sandton Convention Centre in Sandton, Johannesburg on Friday 28 August 2015. AECOM was the naming-rights sponsor for the event for the eighth consecutive year!

The winners were ultimately determined by aspects such as aesthetics, the mass of the bridge and its weight-bearing capacity.

The Brackenfell High School team from Cape Town with team members Philip Kleynhans, Dewald Mouton and Niël Oosthuizen, won the competition with a bridge carrying 155.2 kg and an overall score of 229.7. Harriston School from Harrismith in the second place, was represented by Hugo Beuken, Suné Beuken and Kiara Bramley. Their bridge failed on 112 kg with an overall score of 174. In the third position was the Grade 8-team, the youngest in the finals, with Jacob Allen, David Bosman and David Pop representing Domino Servite School near Pietermaritzburg.  They constructed a bridge that carried 80.1 kg and in total scored 144.5.

Each team consisted of three learners from Grades 8 to 12. The bridge building kits contain 25 dowel sticks of 3mm thickness, glue and a piece of string. Construction was done according to a technical briefing given on the day. The teams then got down to the gruelling business of planning, designing, measuring, cutting dowel sticks and constructing the bridge by gluing everything together to form sturdy bridge structures, while racing against the clock towards tools-down time!

Without the naming-rights sponsor, AECOM, and RICHEM, the glue sponsor, Peri Formwork Scaffolding Engineering sponsoring the rigg and SANRAL, this event would not be possible.

Approximately 600 schools from across South Africa, Namibia, Swaziland and Zimbabwe are reached to determine who the finalists would be in this exciting competition, now in its 24th year. The finalists from all the regions, organised by the SAICE Branches countrywide, compete for the much sought after new trophy in the form of a bridge, the cash prizes for team members and their schools. This year’s finalists came from as far afield as Bloemfontein, Cape Town, Dendron, Durban, Harrismith, Kimberley, Lusikisiki, Mahikeng, Middelburg, Pietermaritzburg, Queenstown, Richards Bay, Upington, as well as from Namibia (Karibib), Swaziland and Zimbabwe.

Tools-down, and then the meticulously constructed bridges were left to dry. Once ready, the adjudicators completed their task regarding bridge aesthetics and mass. The teams, after having exchanged daytime T-shirts and tracksuits for school uniforms, gathered in The Bill Gallagher Room for an evening of nerve-racking testing of their bridges. Excitement mounted, hopes soared and some dreams were shattered as one team after the other brought their bridges forward for testing on the rigg. Each and every bridge was tested to destruction to ascertain its weight-bearing capability.

The South African Institution of Civil Engineering (SAICE) initiated the bridge building competition in 1991 to further high school learners’ use of Mathematics and Science in an engineering context to grow the profession. It has since become an enormous success. The bridge building competition forms an integral part of some schools’ activities and is recognised on the same level as academic or sports achievements.

Because of its practical and hands-on nature, this event is SAICE’s most successful initiative in attracting learners to civil engineering, as well as promoting a general awareness of the profession. The competition provides an ideal career guidance opportunity. It gives learners the opportunity to also build bridges between people, cultures and countries!

There is little doubt that the annual bridge building competition has, since its inception, captured the imagination of learners and educators who continue returning for more every year! Through the years many civil engineering practitioners have indicated that this competition impacted positively on their choice of a career.

Although there can only be one winner, all these learners benefitted by taking part, flying to OR Tambo, travelling on the Gautrain, staying in a hotel and being in a big city. Getting to meet other people and learners from all corners of South Africa, as well as Namibia, Swaziland and Zimbabwe, was an added advantage, all of which was made possible through the generosity of the naming-rights sponsor, AECOM.

Most of the teams were also privileged to visit a construction site, the Bridal Veil Road Overpass at the Waterfall Estate, where AECOM’s Anton Fourie provided information on and explained the intricacies of the specific structure being built across the N1, just off Allandale Road. Every year the teams and educators agree that this is an illuminating and really enjoyable experience.