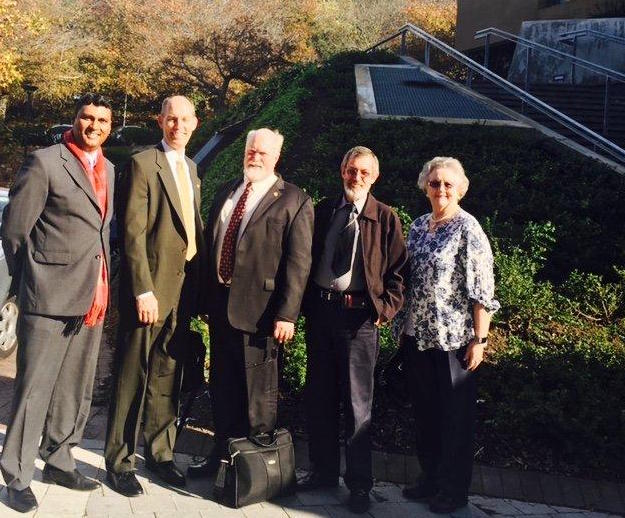 The visit which took place from 12 -14 May 2016 saw both delegations meeting with various regional sectors including both the public and private sector as well as visiting engineering universities. The visit kicked off with both the SAICE and ASCE delegations convening in a round-the-table discussion with industry leaders. In attendance were Senior Manager: Strategic Operations of PRASA Eddie Chinnapen, President of the Institute of Municipal Engineering Southern Africa (IMESA) Duncan Daries, ‎Executive Associate at JG Afrika Andrew Clothier, Emmanuel Akampurira of Kanteys, Jody Klassen Principal at RHDHV Andre Vermaak , Geoff du Toit of Aurecon, and Doug Smetherham of Mott MacDonald amongst others.

The meeting covered various issues – the most prominent being procurement and the challenges associated with scope creep. Considerable time was also spent discussing the mentoring of young graduates. The industry leaders in attendance weighed in on each of the tabled issues from their respective viewpoints – with specific emphasis on possible solutions as well as exploring areas of collaboration to alleviate them. The ASCE delegation used the opportunity to share insight on the issues tabled and the various ways in which they sought to address them. Western Cape branch members later joined the meeting and used the opportunity to raise regional specific issues.

Both SAICE and ASCE delegations had the opportunity to meet with Western Cape MEC of Transport and Public Works, Minister Donald Grant, as well as City of Cape Town Executive Director of Utility Services Gisela Kaiser.

The delegations further visited the University of Cape Town, Stellenbosch University as well as the Cape Peninsula University of Technology (CPUT). The visits provided an opportunity for both visiting delegations to touch base with university management, Heads of Departments of the respective engineering faculties, lecturers as well as interact with students and student chapters.

A branch cocktail was held at the Granger Bay Hotel School organised by the Western Cape Branch. At the event SAICE President Chris Herold addressed members. The evening was well attended with an impressive turnout of engineering professionals.

Sharing his impressions of the overall visit, SAICE CEO Manglin Pillay commented on how he wished to convert the groundwork that SAICE has laid down into positive tangible outcomes for its members and industry, “I’m impressed with the level of activity the branch is involved in, however I do believe SAICE is inadequately prepared to respond to challenges facing the industry, SAICE needs to be more vigilant and ready in relation to capacity building, supply chain management, systems as well as general advice. We have established great relationships with industry at every level and have an amazing network – we need to use these more effectively”.