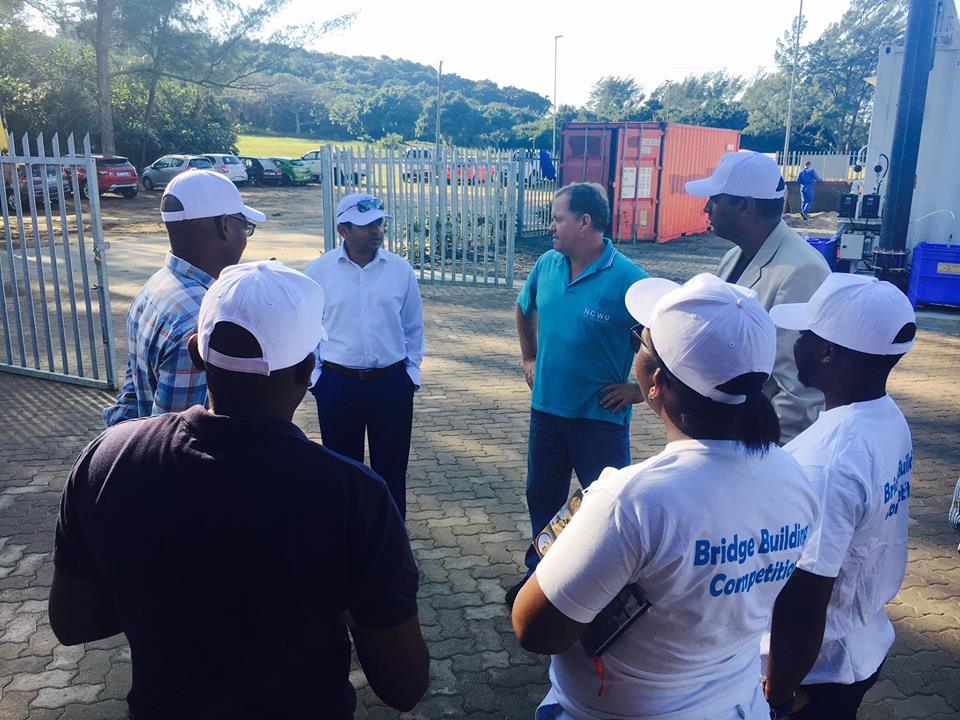 The second round of presidential branch visits saw SAICE 2017 President Sundran Naicker and CEO Manglin Pillay visit the Zululand region, over a two day tour between 3rd and 4th May 2017.  The purpose of this visit was to explore new industry related projects within the area and engage with municipalities and members of the institution on pertinent matters such as procurement, unemployment and skills implementation within municipal structures.

The first day kicked off with a breakfast meeting with the regional committee at the Premier Hotel, Richard’s Bay, followed by site visits to the Desalination Plant Site and the Gloedetrow Dam Site.

The desalination plant at Alkantsrand, Richard’s Bay was established in order to ease the water woes caused by the current drought to areas such as Meerensee, Mzingazi and Mbonambi. The plant has begun desalinating water abstracted from the local Manzamnyama Canal, where it is then processed to separate salt and other minerals to yield fresh, drinkable water.

The upgrading of the Thukela-Goedertrouw Transfer Scheme was upgraded by the Department of Water and Sanitation (DWS) with a goal of preventing the Richard’s Bay area from running out of water. The Goedertrouw Dam is Zululand’s major water resource and had reached a record level of 25% and as such, prompting the need to upgrade. Through this Scheme, water is pumped from the Thukela River to the Goedertrouw Dam. The budget for this project was approximately R410 million for a 12 month period which began in June 2016.

The day ended with a cocktail dinner that featured the President and CEO host their first interactive address, which had members buzzing with various ideas and solutions to pressing issues within industry.

The final day saw the delegation at the N2 expansion site which was contracted by Murray & Roberts for an impressive makeover on the 33.7 km stretch of N2, between the Mtunzini Toll and Empangeni/Richard’s Bay off-ramp. The scope of work included the construction of a second carriageway to create a dual highway which included the rehabilitating of the existing road over a period of 40 months.

Following the site visit, the delegation were invited to the Bambisanani Careers Day event where the President, CEO and members of staff from the SAICE National Office and Zululand regional office addressed 250 Math and Science students on various career prospects that awaited them. Students then embarked on a 15 minute Q&A with the delegation which covered a variety of areas in relation to civil engineering.