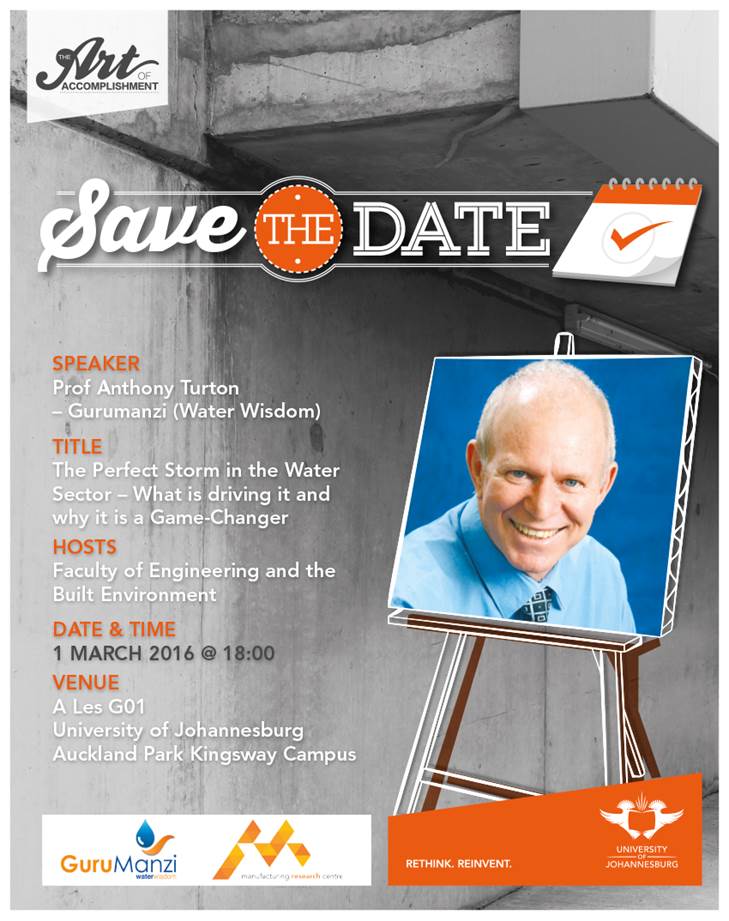 We are currently in the grips of a major El Nino drought event. We are releasing around 4 billion litres of untreated, or at best partially treated sewage into our national rivers and dams daily. The aquatic ecosystems are already distressed by the drought, but are now insulted further by these sewage flows. In effect we have created a massive biological reactor into which we are pumping partially metabolized drugs, including antibiotics, antidepressants, antiretrovirals, recreational narcotics and oestrogen. In this primordial soup we have rapid bacterial and viral replication taking place, with an increased likelihood of mutations in the presence of these low concentrations of drugs. While this is happening, we have a typhoid outbreak, not yet an epidemic, but hovering on the horizon as a present risk. Concurrently the capacity of the state to respond seems to be diminishing, with the trend in both Green and Blue Drop compliance deteriorating. In effect we are now overloading our major potable water plant, none of which were ever designed to safely convert sewage effluent into drinking water. In short, we have a perfect storm as major drivers converge, potentially creating a game-changing event over which no individual stakeholder has any direct control.

What happens if we see a mutation of a common pathogen like Cholera or Typhoid, because of the exposure of these bacteria to low doses of partially metabolized mediation? What is the actual status of science with respect to the linkage between microcystin toxins and degenerative disease of the central nervous system? What is the extent of exposure by ordinary people to low concentrations of Microcystin? What possible solutions should be considered? How do we inform the public without creating panic? How will this Perfect Storm play out and will the Business as Usual approach survive? Will disruptive technologies take us to a new Business Unusual? While this plays itself out, what can the ordinary citizen do to protect their family from exposure?