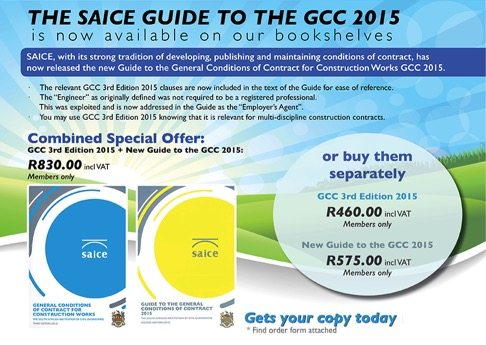 THE SAICE GUIDE TO THE GCC 2015, is now available on or bookshelves.

This is a proud moment for The South African Institution of Civil Engineering (SAICE), with its strong tradition of developing, publishing and maintaining conditions of contract, has now released the new Guide to the General Conditions of Contract for Construction Works GCC 2015. This replaces the Guide to the GCC 2010.

Background to the amendments in the GCC 3rd Edition 2015

In the Foreword of the General Conditions of Contract for Construction Works, third Edition (GCC 3rd Edition 2015) a number of amendments to GCC are mentioned. These include that the Contractor may suspend the Works if the Employer fails to make payment on a payment certificate Also included are that strikes and electricity cuts are the Employer’s excepted risks and recognizing the Contractor’s time risk allowances in his programme. And then, there is the controversial name change. After many years of calling the person who must administer the Contract on behalf of the Employer the “Engineer”, this person is now called the “Employer’s Agent” This change was necessary because GCC 3rd Edition 2015 is also suitable and extensively used by other discipline engineering contracts.

The true rationalization of these and the other changes is explained in the new GUIDE TO THE GCC 2015.

The relevant GCC 3rd Edition 2015 Clause is now included in the Guide.

The “Engineer” of erstwhile was not required to be a registered professional. This was exploited and had to be stopped.

You may use GCC 3rd Edition 2015 knowing that it is relevant for construction contracts.