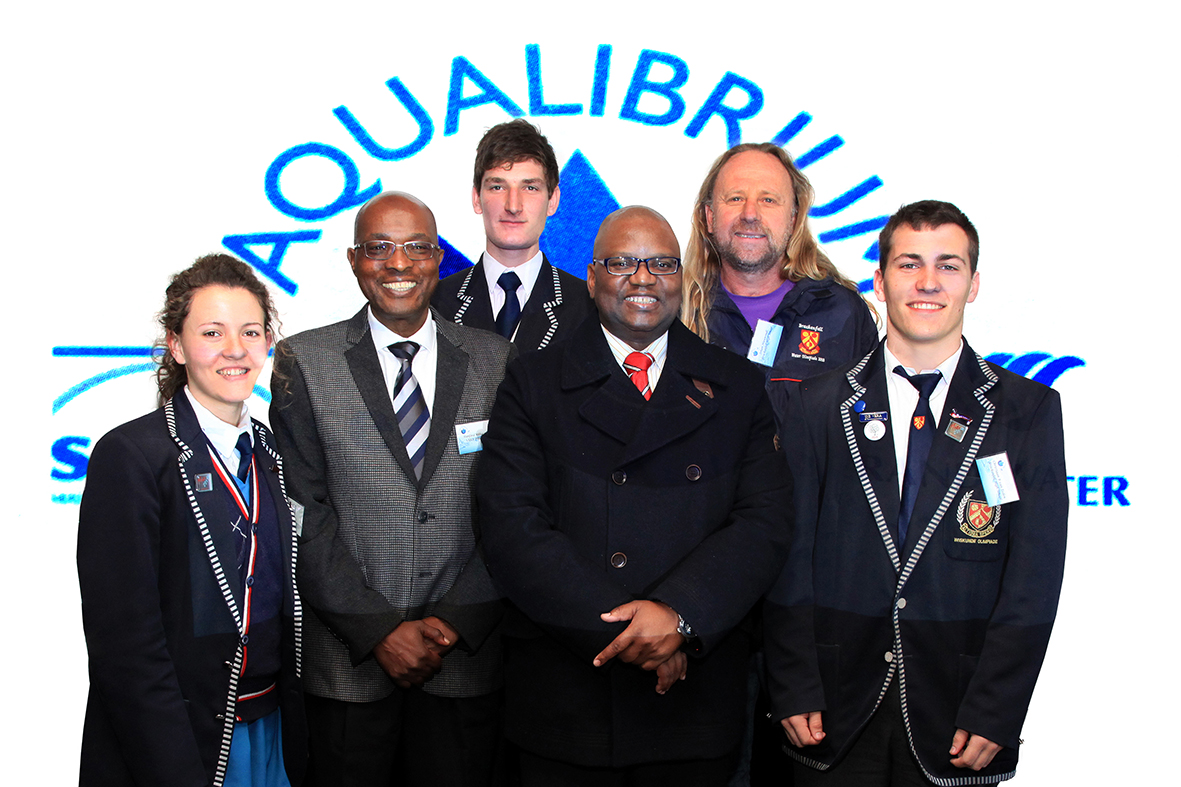 The finals of AQUALIBRIUM, the exciting SAICE-Rand Water Schools Water Competition 2014 was held at the Sci-Bono Discovery Centre in Newtown, Johannesburg on Friday, 25 July 2014. It never fails to excite the teams, spectators and everybody involved! This competition strengthens initiatives to encourage learners to take mathematics and science to enable them to choose one of the top priority scarce skills on government’s list, i.e. civil and other engineering disciplines, as well as water-related careers.

The new streamlined equipment, developed by Professor Kobus van Zyl of the University of Cape Town and ‘creator’ of the water distribution network concept for the competition. The competition illustrates to participants the realities, which municipalities face in curbing water losses.

This year the winners of the regional competitions came to Johannesburg from as far as Bloemfontein, Cape Town, Buffalo City (East London), Nelson Mandela Bay (Port Elizabeth), Kimberley and Dendron in Limpopo, to battle the local winners for top honours. Many of the teams were flown to Johannesburg and accommodated in a good hotel ? an experience that these young people and many educators will never forget! For most, this is a first experience of flying and visiting the ‘big city’.

DPI Plastics and Bosch Stemele, this event would of course, not be possible.

As a direct result of this competition there are presently three students studying civil engineering. These young people from disadvantaged backgrounds are determined to go MAD, i.e. Make A Difference in their communities.  We just have to continue with these kinds of projects in order to make a difference to the scarce skills situation and the lives of many people!

For a second successive year AQUALIBRIUM, the initiative, had the honour of being chosen as one of four finalists in the National Science and Technology Forum (NSTF) and BHP Billiton Awards, the oldest and most prestigious in South Africa, in the category where an individual or team is recognised for their outstanding contribution to science, engineering, technology and innovation (SETI) through science communication and through creating science awareness. Making it to the NSTF-BHP Billiton Awards as a finalist is an exceptional achievement. The SAICE team comprises Prof Kobus van Zyl from UCT and Marie Ashpole and Fridah Mahlangu from SAICE National Office.

Both the South African Institution of Civil Engineering (SAICE) and Rand Water celebrated a hundred years of existence in 2003 and as part of their centenary celebrations they launched this joint competition for high school learners devised by Professor Kobus van Zyl and students from the University of Johannesburg. Since then the competition has been streamlined and has gained momentum in application.

Water distribution systems are important to supply safe and clean drinking water to people. The teams are tasked to design a model water distribution network to distribute three litres of water equally between three points on the grid using two different diameter pipes and connection pieces. They are then judged on how well they execute the task – working on a penalty points system. They have a period of about an hour in which to design, construct and operate their network. This competition exposes learners to the practical application of processes that influence their daily lives, which is how water gets to their homes. They are made aware of the intricacies involved in the design of water distribution networks and the actual water delivery to households.

The grid used for the water distribution network is on a background that depicts the entire water cycle. It intrigues learners, as well as educators, who find it a very helpful educational tool.

The competition creates awareness regarding the issues surrounding water in South Africa. It spreads the message that water is a precious commodity, the use of which should be reduced, recycled, re-used, respected and conserved. Through this competition SAICE and the WRC, the current major sponsor, took the responsibility of spreading the news that water should be used wisely, that infrastructure should be maintained and that new infrastructure should be created to provide potable water to those without water.

This initiative has to continue. Only in this way can we assure that the quality of life of all South Africans will be better in future!