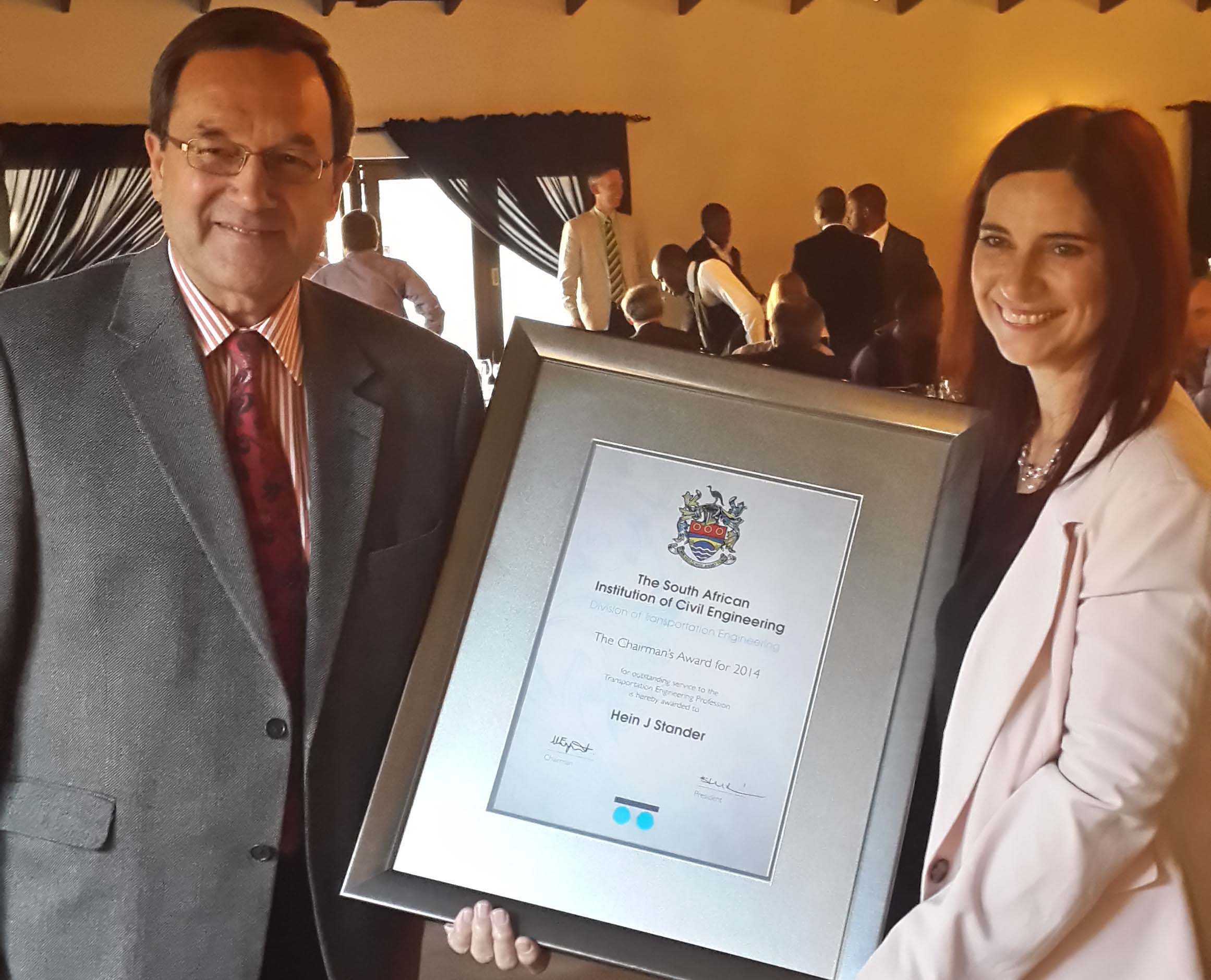 The SAICE Transportation Engineering Division held their Annual Chairman’s Award Luncheon on Thursday the 29th of May 2014, at the Accolades Boutique Hotel, Midrand. The event was well attended by more than 120 engineers from the leading transportation engineering companies in the country. Manglin Pillay, SAICE Chief Executive Officer, Steven Kaplan, SAICE Chief Operating Officer, and guest speaker, Hishaam Emeran from Passenger Rail Agency of South Africa (PRASA) were also part of the proceedings.

Madeleen Engelbrecht, Chairperson of the Division, highlighted the division’s key focus areas for 2014. “Our overall aim is to have a more positive impact on the industry. Firstly, we wish to attract more transport professionals and inspire excellence. We have initiated the ‘outreach programme’ at universities which involves working with the various SAICE Student Chapters to host talks and encourage an interest in post-graduate programmes in transport. We will also liaise with universities to understand their curricula and increase the emphasis on transportation subjects at under-graduate level” said Engelbrecht.

To honour these objectives, the division sponsored a number of students from the University of Pretoria and the Tshwane University of Technology to join the event.

The division aims to further the science of transportation engineering and enhance the industry knowledge base. Part of this programme includes various courses that will be delivered throughout 2014, which include: Universal Access Design; a refresher course on the Highway Capacity Manual as well as the Transit Capacity and Quality of Service Manual course.

The transport division comprises nearly 1 400 members making up 11% of the total SAICE membership.

Hishaam Emeran, General Manager Strategic Network Planning at PRASA was the guest speaker. He is a civil engineer with 20 years of experience in Transport Planning and Engineering. Emeran was responsible for the development of the Strategic Rail Plan, and the planning phase of various projects including:

The presentation provided an overview of PRASA, focusing on the challenges facing rail as well as suburban and long distance/regional rail priorities. PRASA’s total rail network consists of a total of 22 300kms, and the commuter rail network comprises 2 230kms of electrified track. The Agency’s assets include 4 638 Metro Coaches, and 1 347 MLPS coaches. Passenger numbers are 625 million trips for Metrorail, 3.1 million passengers making use of the bus service, and 1.5 million SMEYL passengers. There are a total of 498 stations and the total value of PRASA’s assets is R23 billion. “Over the next 10 years, PRASA plans to implement a bold strategy to transform and modernise passenger railways, a significant total investment of R170 billion”, said Emeran.

Being a government bursary holder, he started his career working for the Free State Provincial Administration in Bloemfontein in 1974, and spent two years at the road construction unit in Senekal. In 1979 Stander joined BKS where he has served for the past 35 years. He became a director of BKS in 1991 and is now an Executive at AECOM. Stander has served on the Transportation Committee of SAICE since 1993 and was the Chairperson for the period 1996 to 1997. He is a fellow of SAICE and a member of Institute of Transport Engineers and has been a full member of the Transportation Research Board’s Committee on Access Management since 2012. He has delivered more than 40 papers locally and internationally on transportation and traffic engineering topics.

A number of other awards were also presented during the event:

P Nordengen – Monitoring results of PBS vehicles in the timber industry in terms of productivity, safety and road wear performance.